The purpose of this project was to have a way to monitor our water consumption at home, with minimal modifications to the existing installation.

There were several options to consider: 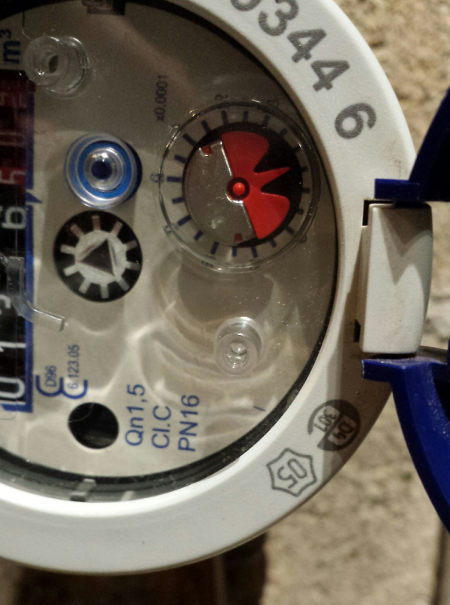 The interesting part is the half-red/half-silver wheel that spins when water flows through the meter. Putting an LED and photodiode above the border of this wheel allows to detect each turn of the wheel, simply by detecting the variations in reflected light. An Arduino is just fine to perform these continuous readouts, implement the counting of the total number of turns, and send this data over a wireless link to some logging server: 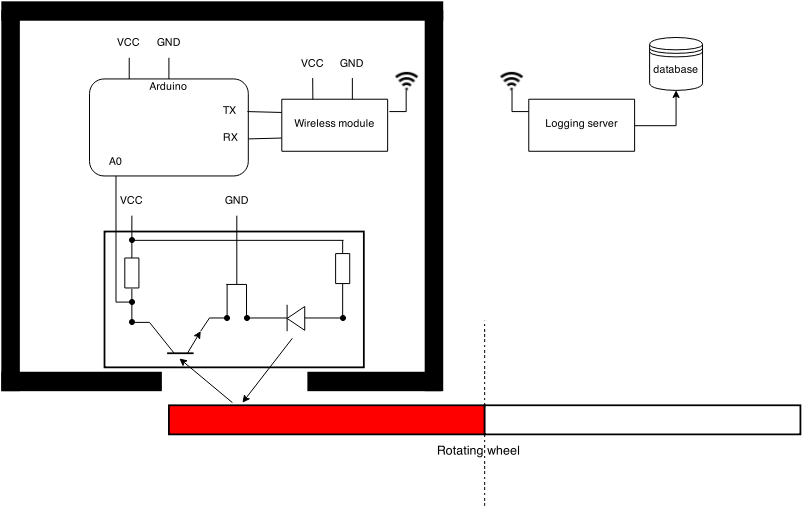 The following parts are involved:

Note: the D0 output is the digital output of the voltage comparator, which threshold can be set with the onboard potentiometer. D0 ouput changes state when the threshold is crossed. In my case however, it turned out to be difficult to find an appropriate threshold that would correctly detect the wheel rotations, so I ended up using the analog output (A0) and implementing my own filtering/threshold detection logic in the arduino

To ensure that the sensor would be properly located right above the border of counting wheel, I cut a plastic mount plate fitting the original meter shape and plastic pegs positions, then taped the sensor on top of it. Here is a view of the top: 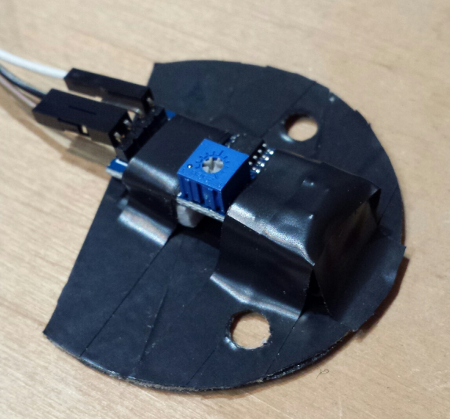 And here is a view of the bottom, with the small opening for the IR LED & photodiode. I used black tape and a small opening window, to minimize the influence of external light on the measure. 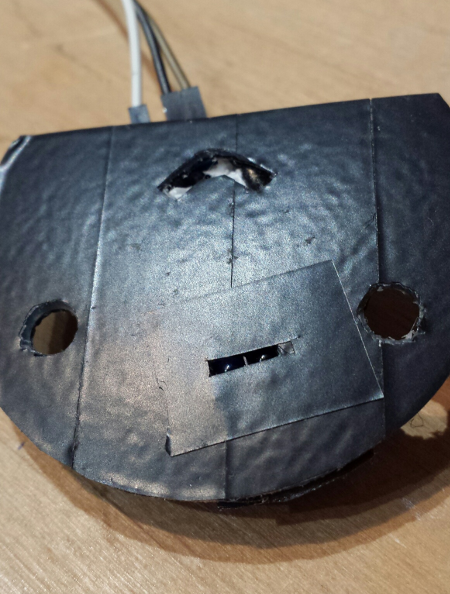 Finally, here is a view of the device mounted on the water meter: 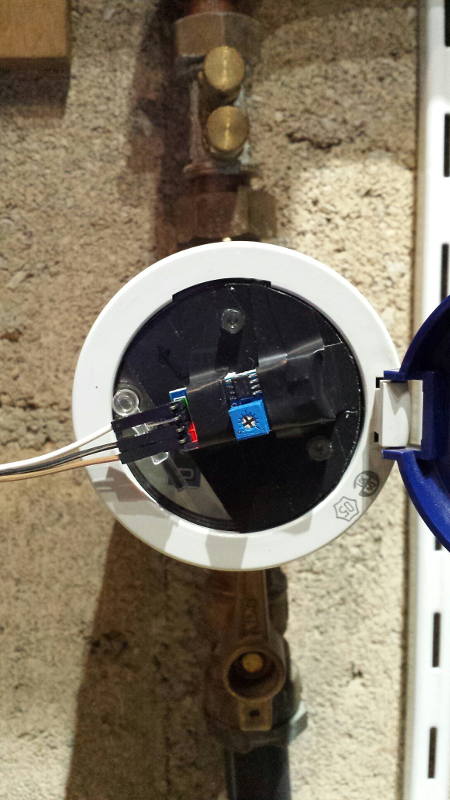 The two plastic pegs ensure that the device does not move during measurements, yet it can be easily removed if needed.

Even though things worked just fine with the mounting plate described above, I used this as an opportunity to experiment with online 3D printing. Below are two views of the 3D model I created using Sketchup Make: 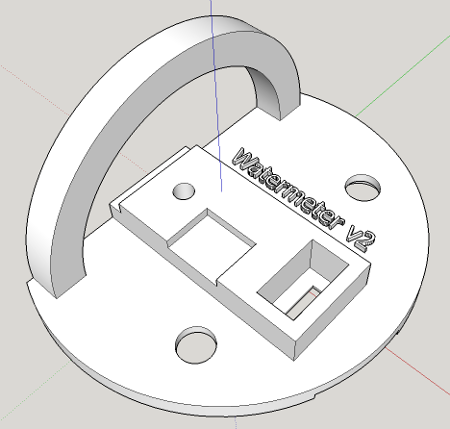 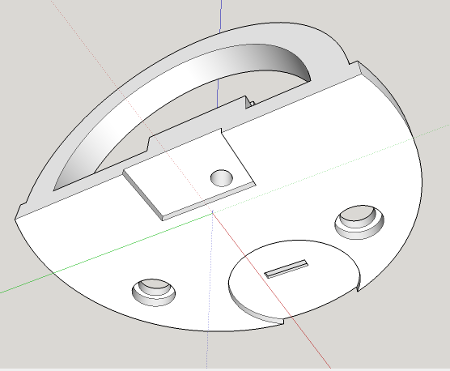 The square and circular sunked surfaces are there to accomodate the bumps present on the sensus 620’s front plate, so that the holder can stick perfectly.

I then used a Sketchup extension to export the Sketchup model to a 3D-printing-friendly STL file, uploaded it on an online printing service (Sculpteo.com), and got it printed for about 10 dollars.
Both the Sketchup model and the exported STL file are available here.

I was actually pleasantly surprised by the result: the surface finish is decent, and the plastic is quite stiff. 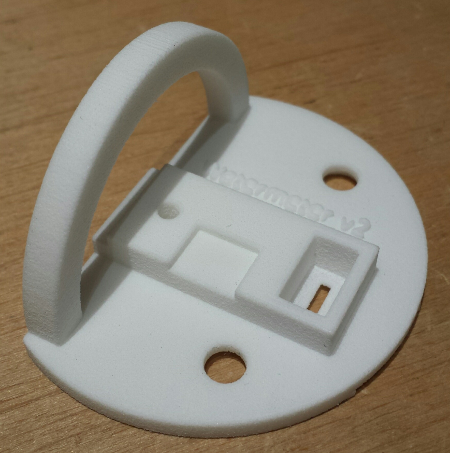 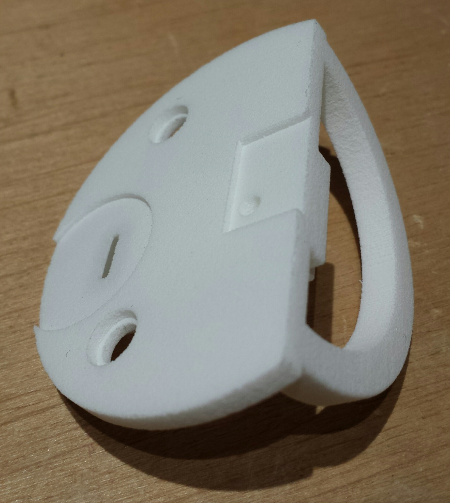 Here it is, mounted on the watermeter with TCRT5000 sensor 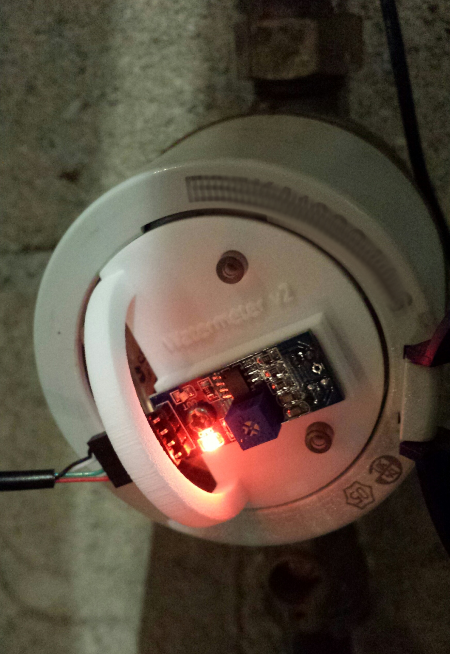 The analog output from the photodiode is inversely proportional to the amount of reflected light:

The initial test code below allowed to visualize readouts from the photodiode directly on a oscilloscope: the analog value from the photodiode is read on pin A0, which provides a value between 0 and 1023. The value is then divided by 4 to fit in the 0-254 range, it is the written to the output pin 11 which happens to work as a PWM output: the duty cycle of the signal on pin 11 will vary depending on the input analog value:

When the LED/photodiode is on top of the silver part of the wheel, most of the light is reflected, the analog value is very low, and the PWM signal has is high only for a very small portion of time: 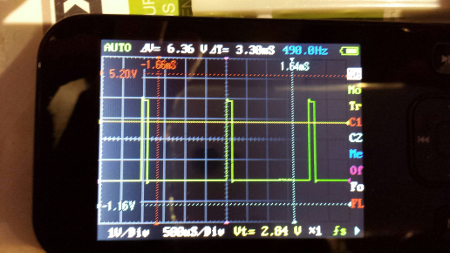 When the LED/photodiode is on top of the red part of the wheel, the reflected light is much less, the analog value is higher, therefore the PWM signal stays longer at the high level: 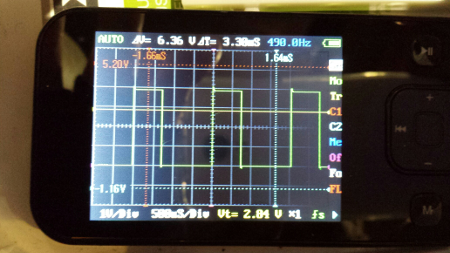 To experiment with remote data transmission, I started with using a Bluetooth module (this JY-MCU version) connected to the Arduino.

The wiring is extremely simple: connect VCC, GND, and RX and TX (respectively to TX and RX of the Arduino). When powered, the red led on the module should blink (i.e. module is waiting for association). Out of the box the device is ready to use, but should you need to reconfigure it, instructions to connect to it with an FTDI cable are available in this project

On the Arduino side, communicating with the Bluetooth module is trivial: just use the Serial library. The code becomes:

On the (linux) host side, I used a USB bluetooth adapter, connected to the bluetooth module using Ubuntu bluetooth manager and initial pin code “1234”. Then from the command line:

At this point, the shell should display:

and the led on the bluetooth module should not blink anymore.

Measured values should be displayed regularly.

I logged these output values, and let the capture run while using the water normally. At the configured acquisition rate of 4 samples per second (250ms delay in the code), when the water flow is moderate, one rotation corresponds to the following curve: 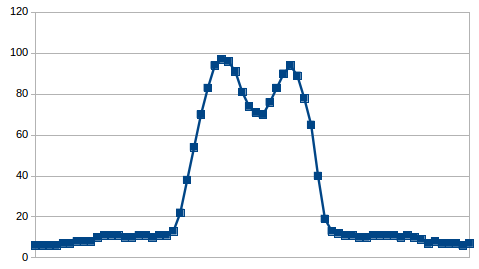 Values below 20 correspond to the time when the sensor sees the silver part of the wheel, while the two peaks correspond to the pointy red part passing in front on the sensor. So far, so good, there is a clear distinction between both zones. But since acquisition rate is slow, when the water flow increases and the wheel spins faster, there are less and less measures points in the peaks: 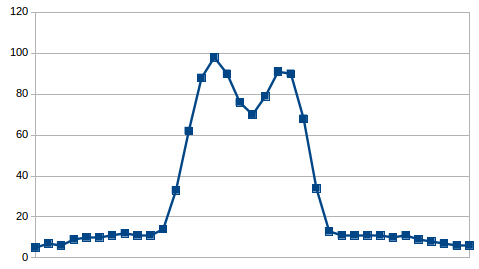 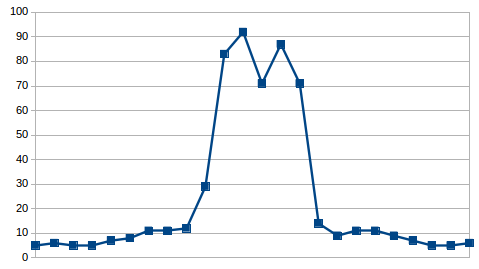 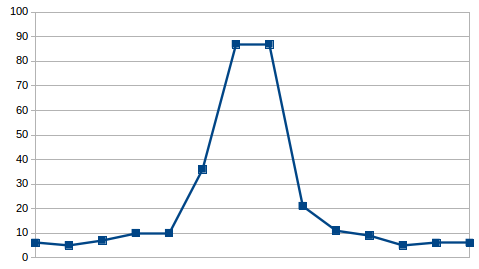 This is the worst case / fastest case I noticed, and the peaks only contain two samples. Therefore I decided to increase the acquisition rate, from 4 to 10 Hz, by reducing the delay to 100ms between readouts.

Other interesting cases happen depending on where the wheel was when the water flow stopped: 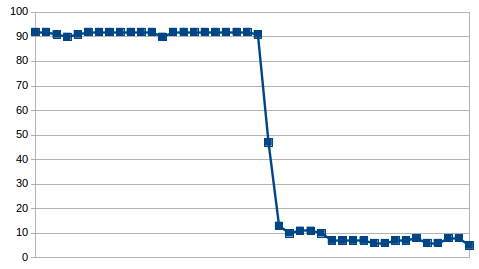 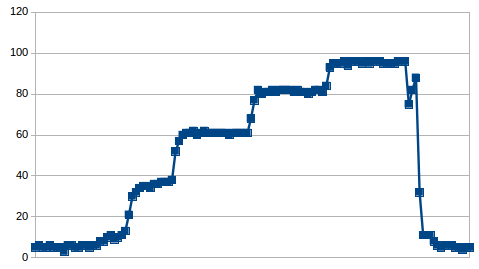 With this data available I set two thresholds for the counting logic: 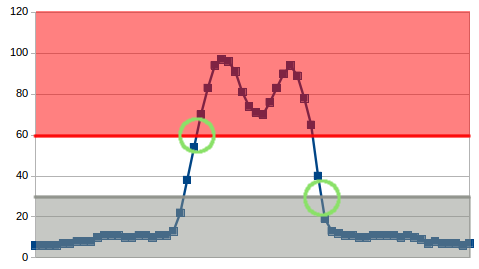 Both thresholds are separated to have an hysteresis effect, to prevent counting possible oscillations around one of the thresholds as multiple turns.

Once the counting of wheel turns is in place, the only remaining thing is to convert the number of turns into a volume of water: in the case of my sensor, one turn = one liter.

Bluetooth module was working fine, but was a bit of an overkill to be the permanent solution for this project, so I moved to cheaper/simpler nRF24L01 radio modules for the final setup. Also, this will enable additional sensors to be used, since the nRF24L01 is multi-channel capable. The nRF24L01 module is supplied with 3.3V power, and since the Funduino pro mini only provides 5V, I also used a 5V to 3.3V adapter. Both are shown below (nRF24L01 at the top, adapter at the bottom): 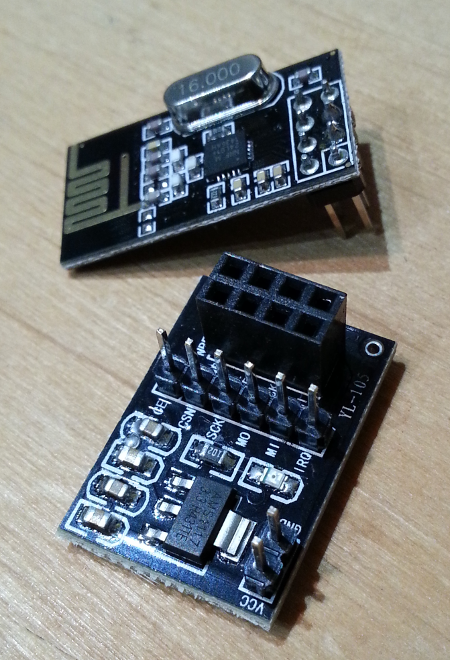 The overall cabling, both on the emitter side (Funduino & TCRT5000) and on the receiver side (Raspberry pi) is shown below: 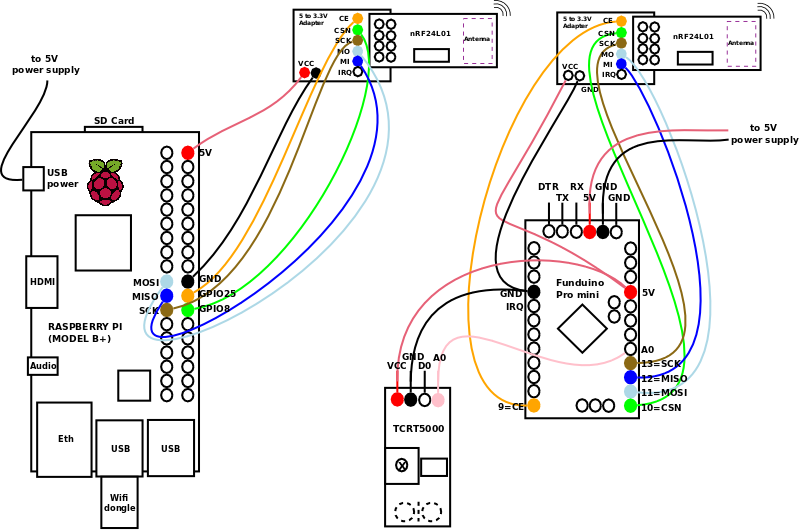 Note: on the raspberry side, even though 3.3V is available on the GPIO connector, I also used a 5V/3.3V adapter like on the Arduino side. I initially connected the 3.3V directly, but found out that the range of the wireless link was largely degraded. The nRF24L01 appears to be quite sensitive to the quality of the input 3.3V supply, and the adapter’s regulator allows to have a cleaner 3.3V supply.

Below is a view of the arduino part, integrated inside a small box that is then mounted near the water meter (the USB connector/cable goes to the TCRT5000 module, I just used the 4 available wires in the cable, and happened to have a spare female USB connector lying around. The cable on the left is the 5V power supply) 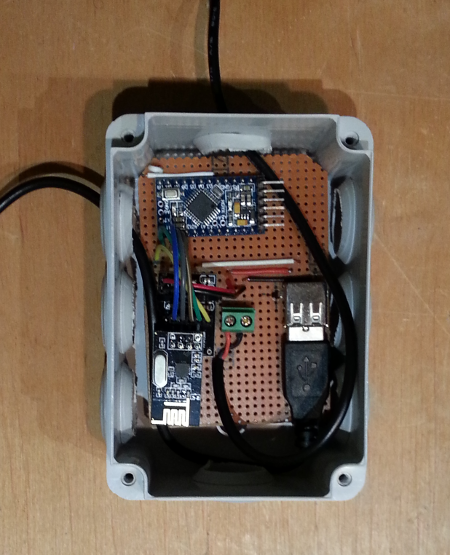 Software install on the arduino side

I downloaded the RF24 library here as a zip file then from the Arduino IDE, imported it (Sketch / Import library / Add library… then navigate to zip file)

Software install on the raspberry side

As usual, everything begins with installing a default Raspbian distribution from raspberrypi.org

2) plug-in a mouse/keyboard/HDMI display and boot-up

3) Use raspi-config to configure the raspberry as required (e.g. keyboard layout) / Select the correct time zone (In Internationalization options => select appropriate area and city) and enable SPI from the Advanced options menu

Once this is done, a few additional actions are required for our setup:

and commenting out the line spi-bcm2708. Then reboot or load the SPI module with

Finally, and as I usually do, I chose python for the raspberry side of the code. I reused a python library for the RF24 modules from here, I archived it here. I just put this nrf24.py file alongside my python script, for the sake of simplicity.

As well as the requests library for remote logging

This great page conveniently provided both an Arduino sketch and a corresponding python script for the raspberry side. After experimenting a bit I settled on the following:

In addition to logging the value locally in a file, the script also logs the value remotely on a data logging server using an HTTP POST request, which payload is of the followinf format

homelogdata is the name of the measurement/data series into which the value is to be inserted, while graph tag is set to waterMeter to allow to later filter on these specific water-meter related values if necessary.

All files are available here.

I wanted to integrate the ability to display logged data over of specified period of time in my HomeHubTablet display, so I developed an Android graph viewer widget to achieve this.

Over time, I noticed intermittent (~once a month) robustness issues on the nRF24 library on reception side (on raspberry pi), where the script would stop detecting messages after a while, and just restarting the service would fix the situation. As a workaround, I implemented a cron job to automatically restart the service nightly, by adding this line in the crontab: