I had a need to monitor data exchanged between two nodes of an RS485 communication link, with the following requirements:

RS-485 is the common/short name for referring to the electrical standards for digital communication described in TIA-485 / EIA-485. It’s a sibling of the well-know RS-232 standard, with two main characteristics that set it apart:

In addition, it is good practive to have a pull-up resistor on the + line, and a pull-down resistor on the - line, to ensure a stable state (i.e. no data bits transmitted by mistake) when the line is not driven by any of the nodes.

In this project, I chose to use a cheap RS-485 to UART adapter module based on the MAX485 chip (I got 5 pieces for 4 euros), its circuit diagram is as follows: 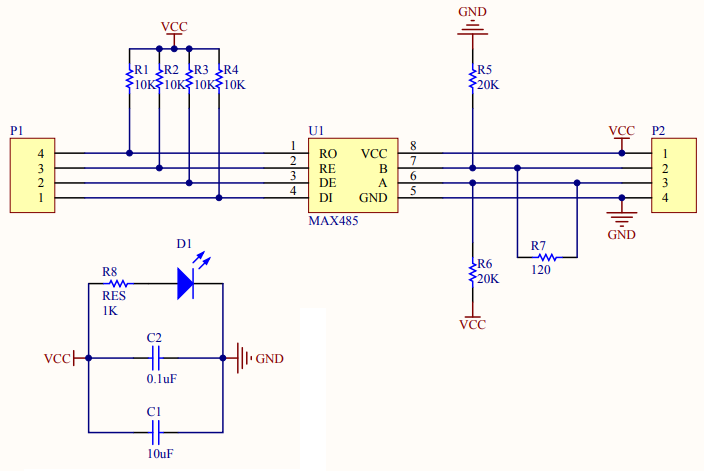 Note also that the module comes with a 120ohm termination resistor connected between A and B: this is generally a good thing when one uses two of these modules to implement a point to point connection, but in my case the intent is to plug the spy module in the “middle” of the bus, and middle nodes should not have termination resistor, so I removed the R7 resistor: 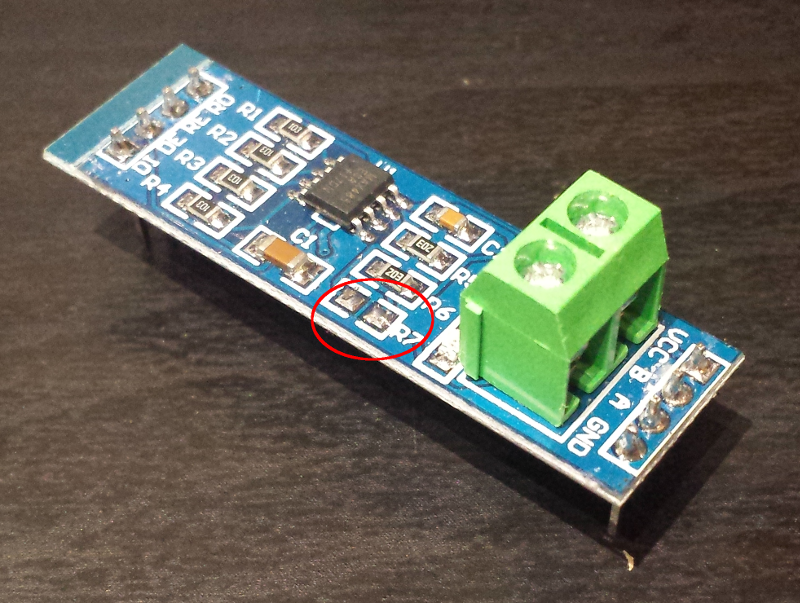 Here’s a view of the project HW setup: 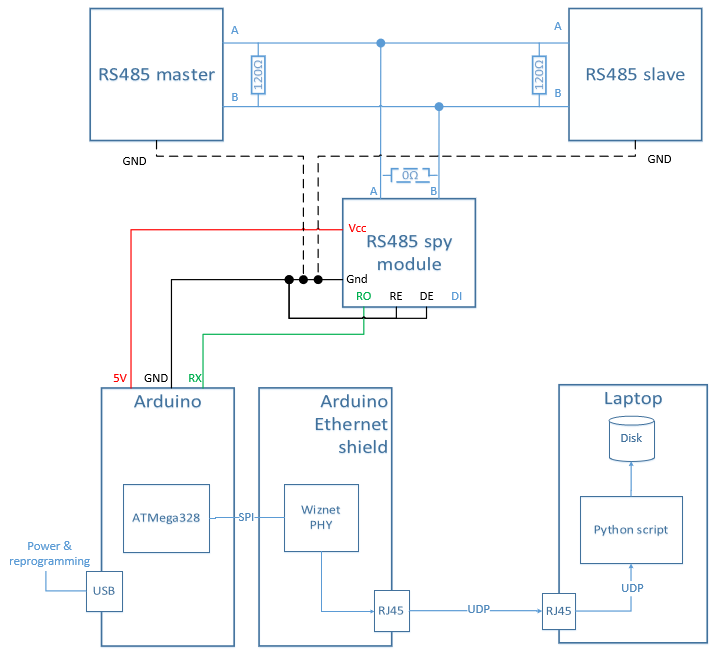 Note : I provisioned a GND connection (shown in dotted line above) just in case. Indeed, there is normally no need for connecting all GNDs of the modules communicating over the bus, the differential signalling over the wire pair should work in most cases without their GNDs being connected. But in some conditions, the local GNDs of the different modules may be shifted by a high enough voltage difference that the RS485 driver cannot properly interpret the differential signal anymore (i.e. the common mode rejection capability of the RS485 driver is not infinite… ). In this case, connecting all nodes GNDs together can get rid of the issue (and introduce new ones, but that is a story for another day). Anyhow, so far I did not have to connect the GND of the spy module to the GND of the other nodes.

I used an old Arduino Uno board I had laying around. For most projects I prefer small form factors (e.g. Arduino Pro/Mini/Micro), but on this project the need for an Ethernet shield left me no choice, and I had no space constraints anyway. Very few signals are needed: 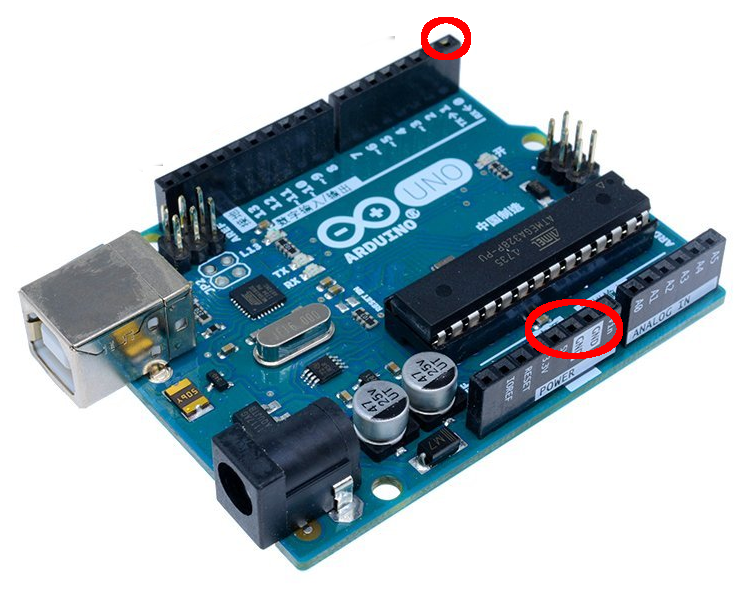 Other than this, the USB port is used to supply power to the Arduino, and reprogram it.

The Ethernet shield is relatively cheap, it can be found for around 10 euros. It embeds a Wiznet W5100 chip that includes an Ethernet MAC, PHY, as well as a hardwired TCP/UDP stack, and gets input data over an SPI interface. 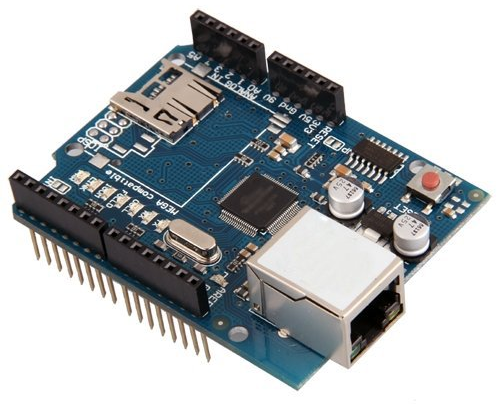 The W5100 support 100Mbit/s Ethernet (100BaseTX), but considering it reads it input data over a 4 MHz SPI interface, the actual achievable bandwidth is probably well below 4 Mbits/sec. For my project, this was not an issue since I had very small data bandwidth to monitor anyway (120 UART bytes, 50 times per second => 120 x 11 bits x 50 ~ 64kbit/sec)

The shield also embeds an SD Card read, which I had no use for in this project.

The shield conveniently provides headers to have access to many (not all) of the underlying arduino board signals, especially the UART RX signal that I needed to connect to the module 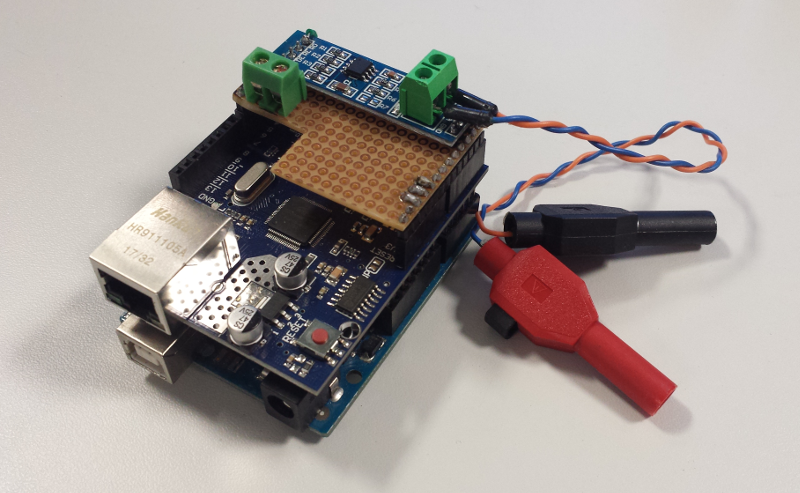 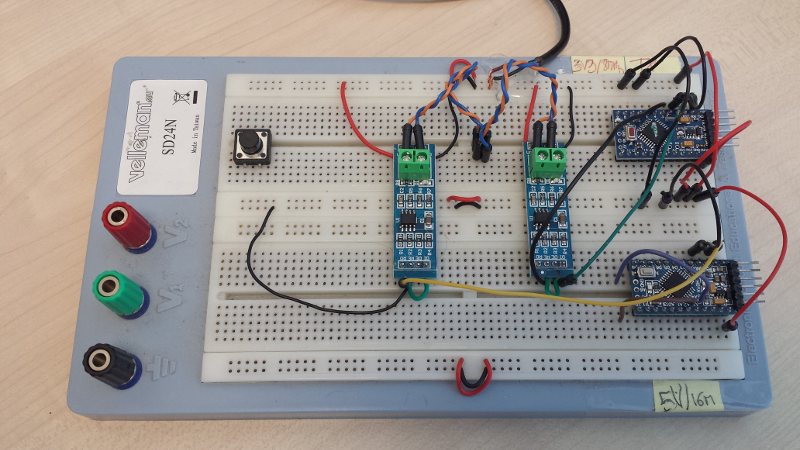 There is nothing special in the code beyond setting up the UART to operate at 1Mbps. Source code for both the test transmitter and the test receiver is archived here

The code on the Arduino spy is very straightforward. First a few variables:

Configuring the Ethernet shield is as simple as using the associated libraries,

and calling this from the setup fonction:

Also in the setup, the baud rate of the UART is set to 1Mbit/s:

My main concern initially was figuring out whether the Arduino Uno’s UART could support the 1Mbps baud rate, as this is a slightly unusually high value for a UART (and is not even a standard value, the closest would be 921 600 bauds). It turned out that 1000000 bit/s is working fine, with proper optimisations having been taken care of in the version of the UART library that ships with the Arduino release I used (1.8.1).

Still, 1 Mbps is 1MHz / 1 bit every µs, while the Arduino runs at 16 MHz. Receiving one character corresponds to 11 bits, so this means that one can execute an absolute maximum of 11x16 = 176 instructions and still keep up with reading incoming characters. That is not such a large amount of code that is possible to execute between character receptions. So I kept the core of the receiving code to its absolute minimum, reading the received character into a local buffer and incrementing the buffer index:

While characters from a given message are coming in, this is the only code that gets executed, and it keeps up just fine with receiving successive characters at 1 Mpbs, i.e. one character every 11 µs.

The next step was figuring out a way to determine that all characters from a message have been read : if the message size is known, one could just count characters, but this is not robust to any kind of error in character counting. So instead I went for the typical mechanism of detecting inter-frame gaps, i.e. detecting that during a given amount of time no new character has been received, and using this criteria to determine that a full message has been received.

The most convenient way I found to achieve this was using a timer, using the MSTimer2 library. The timer is created with a given period and a specific callback, in the setup part:

The timer is (re)started every time a new character is received within the timeout period:

At some point, the last character will come, and then the timer will finally expire, which will result in the callback being executed. In my case it boils down to just setting a flag:

The main loop checks for this flag, and if it is set, builds a UDP packet with the content of the characters accumulated in the reception buffer. The very first thing is to create a timestamp, in microseconds, corresponding to when the message was received. The micro() function returns the current time in microseconds, and the timer period is subtracted from that, so that the timestamp corresponds to the moment when the final character of the message was received:

The functions of the Ethernet library are very easy to use to build and send a UDP packet containing the buffered data :

Source code for the arduino spy is archived here

On the remote host, I chose to use a simple Python script to listen for incoming UDP packets and log them into a file. This works fine for the very limited data bandwidth I have to monitor (i.e. 50 messages of 120 bytes per second), but would probably not be the right approach at higher datarates. Anyway, Python and its socket and logging libraries are so easy to use that I had a script working in no time.

The core of the receiving code boils down to :

Note: passing ‘’ as the IP address will listen on all local IP addresses, so no need to care which broadcast address to use.

The rest of the code is setting up the logging library, and formatting the received data. The logging library takes care of all the file size / historisation management, creating backup files and opening new ones as needed, which keeps the script very simple.

To make the spy a little more sturdy, but mostly to have some fun with Sketchup and my 3D printer, I created an enclosure for the Arduino/Shield/RS485 module stackup, with openings to give access to the RS485 signal headers. 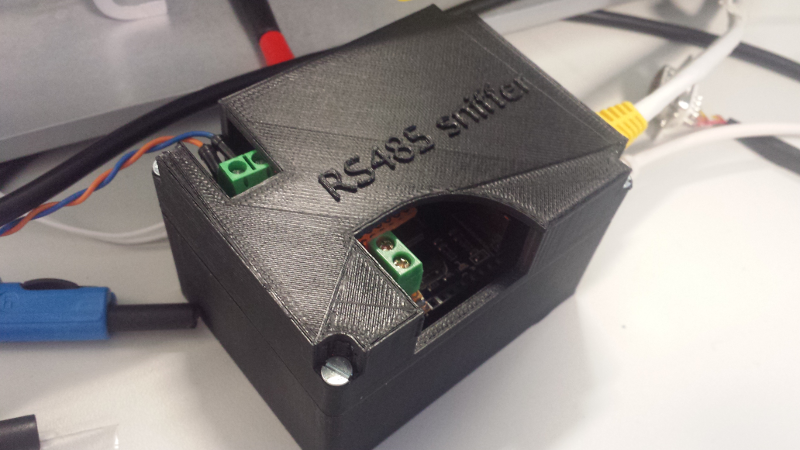 The initial intent of the project being to implement a 24/7 monitoring system, the next step was naturally to let the sniffer & remote logger run for a long time. The initial test of about 10 hours was performed overnight, with full logging of the received data, in a single file. It completely fine, but left the host PC in a state where it struggled with memory and CPU usage.

To lighten the load on the logging PC, I decided to do two modifications:

This second version ran overnight with no issue, and with the logging laptop still alive and well the next morning. I also modified the test setup so that it would create a data error once in a while, to make sure the sniffer detected it :

A few additional days of overnight testing confirmed that the logging is robust (as it should be, considering how straightforward the code is)